Inflation has been forming thunder clouds over the horizon, but it might be a bit too early to declare with 100% certainty if inflation will blow into town.  It has widely been reported that inflation recently hit a rate of 5% annual increase.  This is the highest level in years, but should we be concerned? That is currently unknown…

The lack of inflation over the past few years is a bit puzzling.  If we transported an economist from 1970 and told them the current scenario of low unemployment, record levels of fiscal and monetary stimulus (the government is throwing money out of a helicopter), low taxes, low interest rates, and a booming stock market, they would guess inflation would be around 10%.  The time traveling economist would be wrong. The ingredients for inflation are present, but inflation remains tame.

From a historical point of view, inflation has been quite minimal since 1995.  We are in a dynamic and uncertain economic period; economists have not seen this combination of events before.  Traditional predictive economic models are marginally accurate at best and should be considered “best guess.” 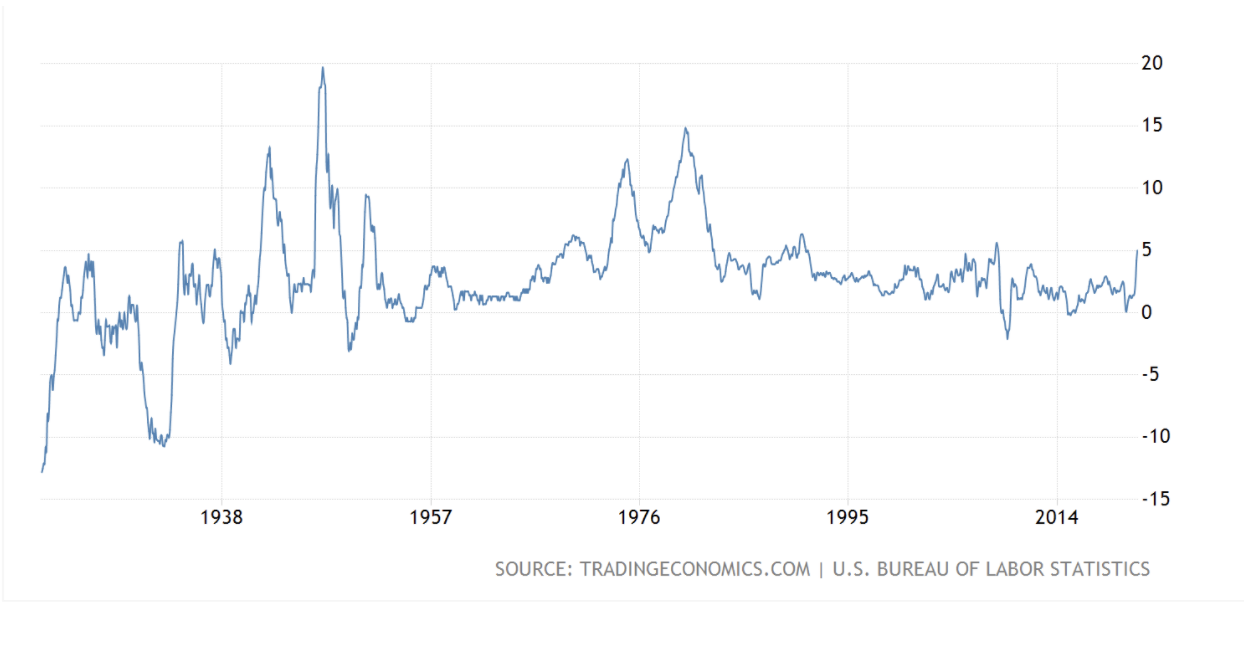 Pushing inflation is the reawakening of the economy from the pandemic.  Certainly, prices are rising, but the question is whether it will be short lived or a preview of an extended period of inflation?  I believe inflation is temporary and will subside.  However, I do believe material inflation will occur within the next decade.

My conclusion is based on an axiom of a simple definition of inflation as “too many dollars chasing too few goods.”

The U.S government ran a deficit of $4,000,000,000 in 2020.  If Welch Financial Planning can be used as a proxy for wealth in this country, most did economically very well during the pandemic.  Many received PPP and EIDL loans and much was forgiven, even though the actual damage caused by COVID-19 to many businesses was minimal.  Refinances have been at historic levels, with many homeowners refinancing for a lower payment; however, not satisfied with just a lower rate, homeowners cashed out $153 billion from their homes.  Many households have seen windfalls from government stimulus, lower payments and cash-out refinances.  So, too much money on one side of the equation is overtly obvious.

The other side of the equation of too few goods is also evident.   Energy, travel, cars, and home improvement activity are at full throttle.  Every seat is taken, every 2’x4’ lumber is flying off the shelves.  Some of the shortages are due to capacity constraints while some are a result of supply chain issues. Automakers cannot get the parts they need to build all the cars consumers want. Demand, demand, demand.

Most of these issues I mentioned should be short-term in nature.  Our desire to travel will subside and supply issues will solve over time.  The interesting piece to me is that it was recently reported that there are 9.2 million open jobs today.  That roughly equates to the same number of people on unemployment.  So, why don’t the two sides just get together and result in zero unemployment?

There are two main barriers. The additional unemployment benefits are keeping some people at home.  There is, however, a structural issue where the skill sets of the unemployed do not match the skill sets of jobs available.  Some companies are responding to this with higher wages (inflation) and some businesses are “making do” by reducing operating hours (Salvaggio’s on Pearl Street).  Explaining the labor issue in the U.S. in a couple sentences borders on irresponsible.  For further analysis, I would read the JOLT report including the accompanying tables.

“Ok Tron, thanks for the information, but how does inflation impact me?”

I believe that inflation is often misunderstood as an absolute negative.  That is simply not true.  Personally, I’m in favor of inflation! (gasp!)  Inflation tends to help home values AND the stock market.  It also helps anyone carrying debt (mortgages and student loans).  Inflation damages lenders (bond holders) and those on a fixed income.  If you are a current client, we have avoided bonds for about a decade and taken advantage of a favorable stock market.  If we continue to avoid bonds, by and large we will suffer little damage by inflation.  Think about having a home mortgage rate of 3.25% while inflation is at 5%.  It’s almost like you are making money by being in debt.  A bit facetious, but inflation will make that mortgage payment a lower percentage of your income.

If you have any questions about how your portfolio will perform during an inflationary time, please give us a call.  I am happy to walk through your investments any time.